Check out a piece of Wolfgang Van Halen’s “You’re To Blame”. 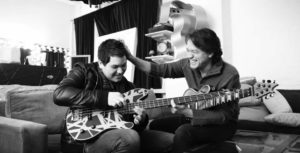 He dedicated the song to his father Eddie Van Halen who had passed away on October 6th 2020.

As Wolfgang has said before, the song does not sound like Van Halen.

The song is credited to “Mammoth WVH”.

The band name “Mammoth” was a name Van Halen used in the early days.

Wolfgang says his father was ok with him using that name.

I’m curious about the band since Wolfgang played all the instruments and sang all the songs for the album as well as having written all the songs.

The short video clip suggests the album will include 14 songs, with “You’re To Blame” being the album’s 11th track and “Distance” being the final track.

The posts tell us the song is “Coming soon” and the video may also be giving us a glimpse of the album artwork as well.

Watch the video clip below.

You can listen to both songs right now! Only on Van Halen Radio, MammothWVH Radio.

Wolf Unveiled The Song List on His Upcoming Debut Album.