Written by Contribute Author on October 7, 2020

The guitarist Eddie Van Halen, who died on Tuesday, of cancer, at the age of sixty-five, was the sort of musician who only seems to appear once every generation: a true savant. His aptitude felt uncanny, as if he had been touched by something extraterrestrial. Whatever sorts of chops gets a person voted “The Best Guitarist in the World” by Guitar World magazine (a discerning and perspicacious publication if there ever was one), Eddie had those and then some. He understood that an electric guitar could generate an extraordinary range of sounds, some of which were deep and percussive, and others that were shrieking and nearly feral. He perfected a bespoke technique in which he tapped along the neck of his instrument, an idea he once said he lifted from Jimmy Page’s solo in Led Zeppelin’s “Heartbreaker,” though their styles feel distinct. Page, who came of age listening to American blues, is a looser and perhaps gentler guitarist; plus, Eddie didn’t play like anyone else. By the nineteen-eighties, as part of the hard-rock band Van Halen, his name had become synonymous with otherworldly shredding. When he started to rip, every guitar nerd in every small town in America stopped what he or she was doing, and whispered one word: “Sick.”

If this all sounds show off-y or bloodless or not very fun, I invite you to revisit the video for “Panama,” in which Eddie, wearing a red bandana and a tank top decorated with dice, gets strung up by his ankle and then later his midsection, grinning and making goofy faces, taking the situation very seriously and yet not seriously at all. When the camera cuts to the crowd, people are melting down with excitement—Eddie is ravishing them. “Panama” is so extravagant—so plainly dumb, so gorgeously jubilant—that when I’m listening to it I often feel my leg involuntarily rising into a high-kick before the vocals even start. The tension between what Van Halen was usually doing (making precise, harmonically sophisticated rock music that was indebted to the Western classical canon) and what its audience was usually doing (pounding beers, going nuts) is part of what makes the band so compelling. 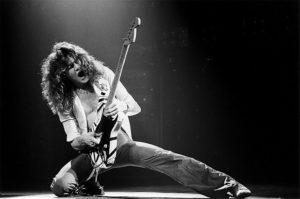 Eddie was born Edward Lodewijk Van Halen, in Amsterdam, in 1955. His father, a classical musician of Dutch descent, met his mother in her native Indonesia when he was on tour. The family settled in the Netherlands but left when Eddie was seven (in part because his mother faced discrimination there), and moved to Pasadena, California, where his father struggled to make money as a musician, and eventually took a job as a janitor. Eddie and his older brother Alex were trained in classical piano, but, like many teen-agers in southern California in the early nineteen-seventies, they were utterly seduced by rock and roll. It’s daunting to imagine the thousands of hours Eddie must have logged with his guitar, practicing until he couldn’t feel his fingers. Nobody gets that good without suffering a little. The brothers recruited the bassist Michael Anthony and the vocalist David Lee Roth into their fold. In 1978, Van Halen released its self-titled début.

“Van Halen” contains “Runnin’ with the Devil,” which might be my favorite Van Halen song. Eddie is somehow playing both lead and rhythm guitar. Every once in a while, a recording of Roth’s isolated vocals drifts about the Internet, and people laugh—he is squealing like someone who has just been stung by a large, strange insect—but I think he sounds perfect. The song itself takes what might be a lonesome lament (“I got no love, no love you’d call real / Ain’t got nobody, waitin’ at home”) and turns it into a celebration of freedom—the pure, easy glee of the unencumbered. The album also contains “Eruption,” an abrasive, reeling, hundred-and-two-second guitar solo that can only be described as equal parts ecstatic and insane. “Van Halen” reached No. 19 on the Billboard 200—a notable achievement for a hard-rock group at the time.

In 1984, the band replaced Roth with a new singer, Sammy Hagar (the precise mechanics of the rift between Roth and Van Halen remains unclear—Eddie was drinking, Roth had too many ideas about the direction of the band—though they did briefly reunite in 1996). Though Hagar was also a good-time guy, this nonetheless marked a new epoch for Van Halen. “Why Can’t This Be Love?,” the first single the band released with Hagar, felt nearly ponderous in comparison to its earlier work. Hagar was asking an earnest, vaguely melancholy question: “Straight from my heart / Tell me, why can’t this be love?” Van Halen had never sounded quite so staid or grown up.

The band ultimately sent eight singles into the Billboard Top 20, and sold more than eighty million records. In 2007, they were inducted into the Rock and Roll Hall of Fame. But by the late nineties, bands like Van Halen—who mostly eschewed profundity in favor of uncomplicated pleasure —were being supplanted by the more brooding and introspective rock music emerging from Seattle. Grunge was a pointed rebuttal to hedonism and excess. The eradication of joy was collateral damage.

It feels worth nodding to the subculture that first nurtured Van Halen. In the town where I grew up, there was a category of kid who worshipped Eddie—the snickering burnouts who smoked in high-school bathrooms, wore denim jackets covered with band patches, grew their hair long, and turned loitering into a kind of art. Heshers, as they were sometimes known, tended to cruise around in either a meticulously reconstructed sports car or a dented passenger van with a bottle of Jack Daniel’s rolling endlessly around the back. Their ethos was a distinctly eighties version of live fast, die young, and Van Halen’s music was a kind of cosmic accompaniment: “We’re all fast breakers comin’ out of the gate / Takin’ chances, we’re the crash and burn,” Roth squealed on “Light Up the Sky.”

I’m a little too young to have known the band at its cultural peak. Still, every time I hear a Van Halen riff, I find myself thinking about being young and broke and bored, leaning against the still-warm hood of my best friend’s car, trying to choke down a plastic cup of warm beer from a keg someone had hastily concealed in a pile of leaves. Despite Eddie’s virtuosity, there’s something so innocent—close to guileless—about his music. It was so expert and strange, it made it seem as if the world was enormous, and anything was possible.

A Rock band from Pasadena California named Van Halen, that rocked the world 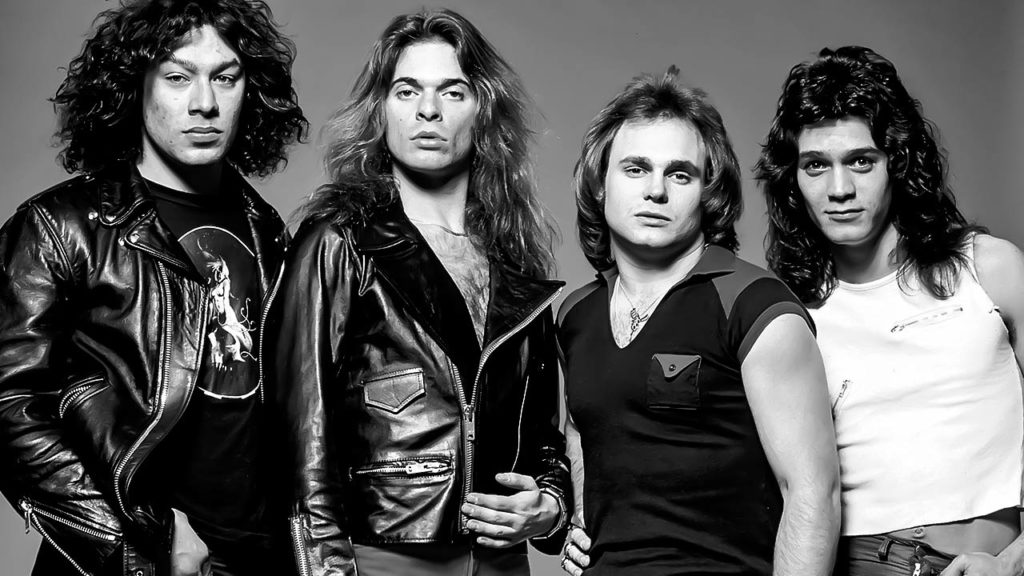